The Peel P50 is a three-wheeled microcar originally manufactured from 1962 to 1965 by the Peel Engineering Company on the Isle of Man. The 1963 model retailed for £199 when new (about £1400 in 2010, or $2200 USD), and currently holds the record for the smallest automobile to go into production. It has no reverse gear thus proving difficult to maneuver in tight situations.

Designed as a city car, it was advertised as capable of seating "one adult and a shopping bag." The vehicle's only door was on its left side, and equipment included a single windscreen wiper and only one headlight. Standard colors were Daytona White, Dragon Red and Dark Blue.

In 2010 production of a replica version was started by a newly formed company, called Peel Engineering Ltd based in England (not to be confused with the original Peel Engineering Company from the Isle of Man). Externally this car was very similar to the original but with many major mechanical differences in the suspension, steering and drivetrain. Driven by an electric motor and with a top speed of 16 km/h (10 mph), this version was produced as a display vehicle and was not road legal. In 2011 production commenced on a new road legal petrol version. Most colors from the original are used in the 2010 models with only Dark Blue being replaced by Capri Blue.

Production is located in an undisclosed location in northern England.

The P50 used a 49 cc (3.0 cu in) DKW engine which gave it a top speed of approximately 61 kilometres per hour (38 mph), and was equipped with a three-speed manual transmission that had no reverse gear. Consequently, turning in a confined area could only be achieved by pushing, or lifting the car using the handle on the rear and physically pulling it round. The makers and users claim fuel consumption of 100 mpg-imp (2.8 L/100 km; 83 mpg-US).

At least one prototype, the Peel P55 Saloon Scooter, has also survived. Unlike the production Peel P50 (along with all developments and replicas thereof), this prototype used the less stable layout of a single wheel at the front and two at the back. Approximately 50 Peel P50s were sold at £199 each.

The 2011 petrol variant utilizes a 49cc, 2.5 KW (3.35 HP) gasoline Four-stroke engine and Continuously variable transmission with reverse. A 12 volt electrical system powers the electric starter, lights and windshield wiper. Speed is usually restricted from the factory at 45 km/h (28 mph) by a computerized system, but can be increased at the buyer's request.

The Peel P50 was and is road-legal in the UK, being in the "three-wheeler" category, less than 8 long cwt (900 lb; 410 kg). Cars were exported to other countries, sometimes being classified as a moped, e.g. the P50 that went to Finland.

Appearances in the media

On 28 October 2007, the P50 was featured in a segment of the BBC motoring programme Top Gear on BBC Two, during which the presenter, Jeremy Clarkson, entered the car and drove through central London to work. Clarkson, who is 6 ft 5 in (196 cm) tall, demonstrated that it was possible, although difficult, for tall people to get into the P50. Upon arriving at the BBC, he drove past the car parks, between bollards, to the front of the building, after which he pulled the P50 behind him to his office. He then drove the P50 through the corridors of the office building, which included the background of BBC News 24 while it was on air and used a standard passenger lift (elevator) to get to a meeting, which he attended inside the P50. At the end of the meeting Clarkson drove out of the building and stated that, if the car had a reverse gear, it would be the "ultimate in personal mobility". 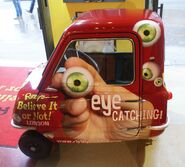 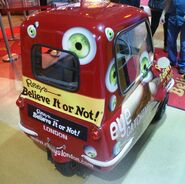 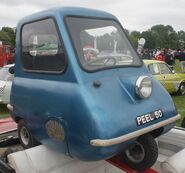 Peel P55, the P50 prototype
Add a photo to this gallery
Retrieved from "https://classiccars.fandom.com/wiki/Peel_P50?oldid=71173"
Community content is available under CC-BY-SA unless otherwise noted.