Start a Wiki
The Porsche 912 is a sports car that was manufactured by Porsche of Germany between 1965 and 1969 as their entry-level model. The 912 is a nimble-handling compact performance four-seat vehicle, delivering 90 SAE horsepower at 5800 rpm. It is capable of up to 30 miles per US gallon (7.8 L/100 km; 36 mpg-imp) fuel economy. This combination is possible because of a high-efficiency petrol engine, low weight, and low drag. A variant of the Type 911, one of the most famous and successful sports cars of all time, the Type 912 initially outsold the 911, boosting the manufacturer's total production until success of the 911 was assured.

Concerned that the considerable price increase of a 911 over the 356 would cost the company sales and narrow the appeal of the brand, a decision was made by executives to introduce a new entry-level model. In 1964, with both the 356 and the 911 in production, Porsche engineers constructed a 912 prototype. Built on the 911's chassis and sharing its bodyshell, Porsche was able to offer the 912 for much less than a base-model 911 by using the four-cylinder engine from the 356 rather than the 911's "flat" six-cylinder powerplant and by reducing the number of standard features. After production of the 356 model ceased in April 1965, in May 1965 Porsche began production and delivery of the 912. The proven reliability of the 356's engine combined with the 911 bodywork and powertrain yielded improved weight distribution, handling, and range. A lower price made the 912 a very attractive buy to both new and old customers, and it substantially outsold the 911 during the first few years of production: Porsche produced slightly more than 30,000 units during its five-year production run. 912s were also used as police (polizei) cars in Europe, including Targas (Porsche's patented variation of a cabriolet with lift-off folding top, rollbar, and an openable plastic rear window). In April 1967, the Porsche factory's Christophorus Magazine noted: "On 21 December 1966, Porsche celebrated a particularly proud anniversary. The 100,000th Porsche, a 912 Targa outfitted for the police, was delivered."

After updating the 911 line-up to include both a more powerful 911S and a less expensive 911T, Porsche executives began to feel that the 912 had become redundant, that the 911 platform was sufficiently diverse and that pricing had largely come into line with market expectations. Owing to this and the desire to introduce a new model, the 912 was discontinued and superseded as Porsche's entry-level model by the 914 in 1970; a vehicle which Porsche had thought would be less expensive for them to manufacture and sell than the 912. In practice, a deterioration in relationships between Porsche and Volkswagen - who had designed and planned to manufacture the 914 - severely curtailed the intended cost reduction, and the 914 was discontinued in 1976.

After a six-year absence, the 912 was re-introduced to North America in 1976 as the 912E (internal factory designation 923) to occupy the entry-level position left vacant by the discontinuation of the 914, while the new 924 – the 914's official replacement – was being finalized and put into production. The new 912 featured the "G-Series" 911 bodywork and was powered by a 2.0 L version of the Volkswagen air-cooled engine, previously used in late-model versions of the 914/4. 2,099 were manufactured in total, and were not officially sold outside the United States.

Sold to the public for street use, the Porsche 912 was also raced, including rally events. Factory Rally Kits were available that included anti-roll bars, racing brake pads, and a dead pedal rest. In 1967 the 912 played a part in Porsche rally history when independent driver Sobiesław Zasada drove a 912 to win the European Rally Championship for series touring cars. 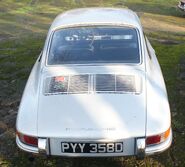 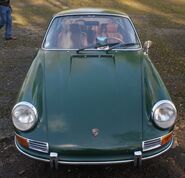 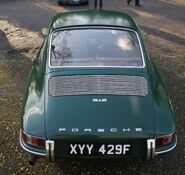 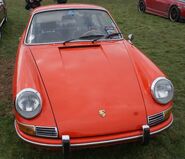 Porsche 912
Add a photo to this gallery
Retrieved from "https://classiccars.fandom.com/wiki/Porsche_912?oldid=49915"
Community content is available under CC-BY-SA unless otherwise noted.