Start a Wiki
The Porsche 944 is a sports car built by Porsche from 1982 to 1991. It was built on the same platform as the 924, although 924 production continued through 1988. The 944 was intended to last into the 1990s, but major revisions planned for a 944 S3 model were eventually rolled into the 968 instead, which replaced the 944. The 944 was a successful model and was available as both a coupe and cabriolet in naturally aspirated and turbocharged forms.

The Porsche 924 had originally been a project of VW-Porsche a joint Porsche/Volkswagen company created to develop and produce the 914 which was sold in Europe as both a Porsche and a Volkswagen. In 1972 a replacement for the Volkswagen version of the 914, code named EA-425 began development. The model was to be sold as an Audi as part of the VW-Audi-Porsche marketing arrangement. Although testing had begun in the Spring of 1974 Volkswagen decided to cancel the program due to the expense of production as well as the feeling that the recently released Volkswagen Scirocco would fill the sports coupe sufficiently. At the time Porsche was considering introducing their own water-cooled front engine 2+2 coupe to replace the 912E and their model of 914 and Volkswagen's cancellation provided an opportunity. Porsche purchased the design and finished development. The vehicle drove and handled exceptionally well and received positive reviews, but was criticized for the Audi-sourced 2-litre engine; Porsche introduced a Turbocharged 924 to increase performance, but the price was considered too high for the time, which hampered sales. Rather than scrap the design, Porsche decided to develop the 924, as they had with generations of the 911; although model numbers would change, the 924 would provide the basis for its replacement.

Porsche re-worked the platform and abandoned the Audi engine, installing in its place a new all-alloy 2.5-litre straight-4 engine, bore 100 mm (3.9 in), stroke 78.9 mm (3.1 in), that was, in essence, half of the 928's 5.0-litre V8, although very few parts were actually interchangeable. Not a natural choice for a luxury sports car, a four-cylinder engine was chosen for fuel efficiency and size, because it had to be fitted from below on the Neckarsulm production line. To overcome the unbalanced secondary forces that make other four-cylinder engines feel harsh, Porsche included two counterrotating balance shafts running at twice engine speed. Invented in 1904 by British engineer Frederick Lanchester, and further developed and patented in 1975 by Mitsubishi Motors, balance shafts carry eccentric weights which produce inertial forces that balance out the unbalanced secondary forces, making a four-cylinder engine feel as smooth as a six-cylinder.

The engine was factory-rated at 150 hp (112 kW; 152 PS) in its U.S. configuration. Revised bodywork with wider wheel arches, similar to that of the 924 Carrera GT, a fresh interior and upgrades to the braking and suspension systems rounded out the major changes. Porsche introduced the 944 for MY 1982 to great anticipation. In addition to being slightly faster (despite having a poorer drag co-efficient than the 924), the 944 was better equipped and more refined than the 924, it had better handling and stopping power and was more comfortable to drive. The factory-claimed 0-60 mph time of less than 9 seconds (8.3 seconds according to "Porsche the Ultimate Guide" By Scott Faragher) was actually rather modest. The factory-claimed top speed of 130 mph (210 km/h) was also pessimistic, Autocar having verified a top speed of 137 mph (220 km/h)[verification needed]. The car had nearly even front to rear weight distribution (50.4% front/49.6% rear) thanks to the rear transaxle balancing out the engine in the front. This gave it very balanced, predictable handling at the limits of adhesion.

For the 1987 model year, the 944 was updated to incorporate anti-lock braking and air bags for increased safety. Because of the ABS system, the wheel offset changed and Fuchs wheels were no longer an option.

For the 1986 model year Porsche introduced the 944 Turbo, known internally as the 951 (952 for right-hand drive models). This had a turbocharged and intercooled version of the standard car's engine that produced 220 hp (164 kW) (217 hp (162 kW) in the US) at 6000 rpm. The turbo was the world's first car using a ceramic portliner to retain exhaust gas temperature. The Turbo also featured several other changes, such as improved aerodynamics, a strengthened gearbox with a different final drive ratio, standard external oil coolers for both the engine and transmission, standard 16 inch wheels (optional forged Fuchs wheels), and a slightly stiffer suspension to handle the extra weight. Major engine component revisions, more than thirty in all, were made to the 951 to compensate for increased internal loads and heat.

The 944 Turbo S's suspension was the then state-of-the-art "M030" option consisting of Koni adjustable shocks front and rear, with ride height adjusting threaded collars on the front struts, progressive rate springs, larger rear torsion bars, harder durometer suspension bushings throughout, larger 26.8 mm (1.1 in) anti-roll bars at the front, and chassis stiffening brackets in the front frame rails. The air conditioning dryer lines are routed differently to clear the front frame brace on the driver's side. The 944 Turbo S wheels, known as the Club Sport design, were 16-inch forged and flat-dished, similar to the Design 90 wheel. Wheel widths were 7 inches (178 mm) in the front, and 9 inches (229 mm) in the rear; sizes of the Z-rated tires were 225/50 in the front and 245/45 in the rear. The front and rear fender edges were rolled to accommodate the larger wheels. The manual transmission (case code designation: AOR) of the 944 Turbo S brought back the external cooler, and also featured a limited slip differential with a 40% lockup setting. The Turbo S front brakes were borrowed from the Porsche 928 S4, with larger 4-piston fixed calipers and discs; rear brakes remained the same as a standard Turbo. ABS also came standard.

The 944 Turbo S interior featured full power seats for both driver and passenger, where the majority of the factory-built Turbo S models sported a "Burgundy plaid" (Silver Rose edition) but other interior/exterior colors were available. A 10-speaker sound system and equalizer + amp was a common option.

In 1989 944S2 was introduced, and powered by a 211 PS (155 kW; 208 hp) 3.0 L engine, bore 104 mm (4.1 in), stroke 88 mm (3.5 in), the largest production 4-cylinder engine of its time. The 944S2 had the same rounded nose and a rear valance found on the Turbo model. This was the first example of the use of an integrated front bumper, where the fender and hood profiles would merge smoothly with the bumper, a design feature that has only now seen widespread adoption on nearly all cars. The S2 was also available as a cabriolet, a first for the 944 line. Performance was quoted as 0-60 mph in 6.6 seconds (0–100 km/h 6.8 s), with a top speed of 240 km/h (150 mph) (manual transmission). The 944S2 also received a revised transmission and gearing to better suit the 3.0-liter powerplant. This car is raced around the world and in the British championship called the Porsche Motorsport Championship.

In February 1991 Porsche released the 944 Turbo Cabriolet, which combined the Turbo S's 250 hp (186 kW) engine with the cabriolet body. Porsche initially announced that 600 would be made; ultimately 625 were built, 100 of which were right-hand drive for the United Kingdom, Japanese, Australian and South African market. None were imported to the US.

End of the line

In early 1990, Porsche engineers began working on what they had intended to be the third evolution of the 944, the S3. As they progressed with the development process, they realized that so many parts were being changed that they had produced an almost entirely new vehicle. Porsche consequently shifted development from the 944 S3 to the car that would replace the 944 entirely, the 968. The 944's final year of production was 1991; in 1992 the 968 debuted. The 968 was sold alongside the 928 through 1995, when both models were discontinued.

The number of surviving 944s is falling due to the high maintenance costs. The post-1985 cars, Turbos, and S variants are considered more desirable than the earlier cars; having improved interiors, suspensions, and engines. The pre-1985 cars are valued due to their lighter curb weight and "no-nonsense" interior layout.

The Porsche 944 has proven to be successful and increasingly popular in amateur road course racing. The 944-Spec class caters to the 1983 to 1988 8-valve 944, and the 944 Cup series has classes for all 924/944/968 and 944 Turbo models. Competitive racing events are held by the National Auto Sport Association and other organizations, as well as compatible rules that allow the same cars to race with the Sports Car Club of America, Porsche Club of America, and Porsche Owner's Club.

In 1984, Car and Driver named the 944 the Best Handling Production Car in America. 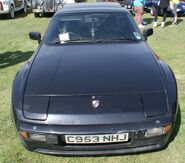 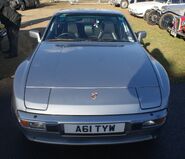 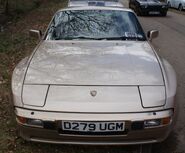 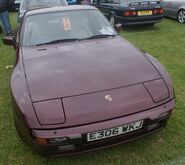 1986 Porsche 944
Add a photo to this gallery
Retrieved from "https://classiccars.fandom.com/wiki/Porsche_944?oldid=68697"
Community content is available under CC-BY-SA unless otherwise noted.