Developed in collaboration with the Israeli motor company Autocars, the first Sabres appeared in 1961 as two-door convertibles, front-engined, rear-drive, with four-cylinder OHV Ford Consul engines of 1703 cc. They had front disc brakes, rack and pinion steering, and a ZF all-synchro gearbox. The front suspension was an unusual leading-arm set-up. Power output was 73 bhp (54 kW) giving at least 90 mph (140 km/h). The bodyshells were originally based upon the Ashley 1172 to which Reliant had acquired the rights. Coupés were introduced in June 1962, and total production reached 208 cars. 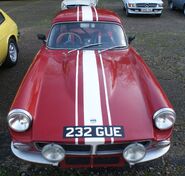 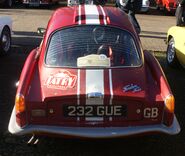 Reliant Sabre 4
Add a photo to this gallery
Retrieved from "https://classiccars.fandom.com/wiki/Reliant_Sabre?oldid=63208"
Community content is available under CC-BY-SA unless otherwise noted.