The Rolls-Royce 25/30 built between 1936 and 1938 is an updated version of the 20/25 with larger engine to provide more power, as often, over-large bodies had been fitted to the earlier model leading to complaints about its performance.

The in-line 6-cylinder, overhead-valve engine is similar to that used in the 20/25 but increased in capacity to 4257 cc by increasing the bore from 3.25 inches (82.6 mm) to 3.5 inches (88.9 mm), with the stroke remaining at 4.5 inches (114.3 mm). The compression ratio is 6:1. A single proprietary Stromberg downdraught carburettor replaced the Rolls-Royce one, and magneto ignition was no longer fitted, but a standby coil was provided. The four-speed gearbox is mounted in unit with the engine, and a traditional right-hand change used. Synchromesh is fitted to third and top gears.

The riveted chassis has rigid front and rear axles suspended by half-elliptic springs with hydraulic dampers. Braking is on all four wheels assisted by a mechanical servo, famously under licence of Hispano-Suiza. Separate rear brakes are fitted for the handbrake. The traditional Rolls-Royce radiator with triangular top was used with vertical louvres, the angle of which is controlled thermostatically to control engine cooling.

Only the chassis and mechanical parts were made by Rolls-Royce. The body was made and fitted by a coachbuilder selected by the owner. Some of the most famous coachbuilders who produced bodies for Rolls Royce cars are Park Ward, Thrupp & Maberly, Mulliner and Hooper, most using single or double suicide door configurations as shown. 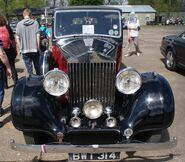 Rolls-Royce 25/30
Add a photo to this gallery
Retrieved from "https://classiccars.fandom.com/wiki/Rolls-Royce_25/30?oldid=68939"
Community content is available under CC-BY-SA unless otherwise noted.