Start a Wiki
The Corniche was Rolls-Royce's coupé and convertible version of the Silver Shadow produced between 1971 and 1996. The Corniche was named "Silver Shadow Mulliner Park Ward two door fixed head coupé" (alternatively, drop head coupé) from 1966 until 1971 when the Corniche name was applied. The exterior design was by John Polwhele Blatchley. (The independent coachmaker James Young had already custom-made a two-door coupé variant of the Silver Shadow, but Young's model proved less popular and was soon discontinued.)

The model was assembled and finished in London at Mulliner Park Ward as continuation of the 1965 Silver Shadow coupe and 1967 drophead, with the Corniche name applied in March 1971. The Corniche was also sold as a Bentley, though that model became known as the Continental in 1984. The first car to wear the Corniche name was a 1939 prototype based on the Bentley Mark V which was never produced because of the onset of World War II.

Although the 1971 Corniche was the first car of that name that the company sold, the "Corniche" name had been registered by Rolls-Royce in the 1930s. The original Corniche was a prototype based on the Bentley Mark V featuring coachwork by the Paris firm, van Vooren. The single car undertook 15,000 miles (24,000 km) of endurance testing in Continental Europe before being blown up by a bomb at Dieppe while waiting at the dockside to be shipped to England.

The Rolls-Royce Corniche was available both as a coupé and convertible, with the former discontinued in March 1981.

The car used the standard Rolls-Royce V8 engine. It had an aluminium-silicon alloy block and aluminium cylinder heads with cast iron wet cylinder liners. The bore was 4.1 in (104.1 mm) and the stroke was 3.9 in (99.1 mm) for a total of 6.75 L (6,750 cc/411 cuin). Twin SU carburettors were initially fitted, but were replaced with the "horribly complex" single Solex 4A1 four-barrel carburettor introduced in 1977. Desmogged export models retained the twin SU's until 1980, when Bosch fuel injection was added.

A three-speed automatic transmission (a Turbo Hydramatic 400 sourced from General Motors) was standard. A four-wheel independent suspension with coil springs was augmented with a hydraulic self-levelling system (using the same system as did Citroën, but without pneumatic springs, and with the hydraulic components built under licence by Rolls-Royce), at first on all four, but later on the rear wheels only. Four wheel disc brakes were specified, with ventilated discs added for 1972. The car originally used a 119.75 in (3,042 mm) wheelbase. This was extended to 120 in (3,048 mm) in 1974 and 120.5 in (3,061 mm) in 1979. In total, 780 Saloons (Coupés) and 1,233 Convertibles were built, for a total of 2,013 Corniche I.

The car was mildly reworked in the spring of 1977, and while it was not officially called Corniche II until 1988, Corniches built between 1977 and 1988 are usually also referred to as such. The major mechanical difference was rack-and-pinion steering. Alloy and rubber bumpers replaced earlier chrome ones. An aluminium radiator was substituted and an oil cooler was added, and a bi-level air conditioning system was added. The Series II was to undergo running changes through its long production run. The changes began with the quiet introduction of the modified rear independent suspension from the soon to be introduced Silver Spirit in March 1979. In March 1981, after the Silver Spirit had gone on sale, the Coupé version of the Corniche and its Bentley sister were discontinued. For 1985 there were also cosmetic and interior changes.

For 1987, general market Corniches joined their desmogged export brethren and were now equipped with Bosch KE/K-Jetronic fuel injection. This engine, called the L410I, produced approximately 240 PS (177 kW) at just above 4,000 rpm for a top speed of 190 kilometres per hour (118 mph). Anti-lock brakes were added for 1988, but air bags would not be available until the Corniche III. Also new for 1988 were some detail changes to the interior, but this was also when the car officially became known as the Corniche II for the first time. Later in 1988 there was also a new reverse warning lens type and pattern around the rear license plate, as well as newly designed seats and redesigned instrumentation.

The Bentley version was updated in July 1984 with a new name, the Continental. This also had color-coded bumpers and rear view mirrors, as well as a new dash and improvements to the seats. Production of the Corniche II (1977-1989) totalled 3,545, with 328 being Coupés and 3,217 Convertibles. 1,226 of these were "official" Corniche IIs. 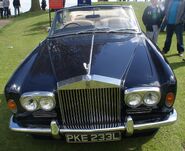 Rolls-Royce Corniche
Add a photo to this gallery

Retrieved from "https://classiccars.fandom.com/wiki/Rolls-Royce_Corniche?oldid=62488"
Community content is available under CC-BY-SA unless otherwise noted.