The J. P. Blatchley design was a major change from the pre-war models and the highly derivative Silver Dawn.

As part of a range rationalisation the Bentley S1 is very similar, apart from its radiator.

The chassis was a simple steel box section, welded together and very rigid. Construction retained the traditional split between chassis and body, which facilitated the provision of special bodied versions though in practice the overwhelming majority of cars were delivered with the standard steel body shell, produced by Pressed Steel, and employing light weight aluminium based alloy for the doors, bonnet/hood and boot/trunk lid. The car was 5.38 m (212 in) long, 1.90 m (75 in) wide, and massed 1.95 tonnes. The engine was a 155 hp / 4000 rpm 4.9 L six-cylinder unit with inlet over exhaust valves: twin SU carburettors were added in September 1957. The standard transmission was a four-speed automatic. Brakes were hydraulic and assisted by the Rolls-Royce mechanical servo with 11 in (279 mm) drums and suspension was independent coils at the front and semi-elliptic springs at the rear. Twin brake master cylinders were incorporated from April 1956.

Power steering became an option in 1956 along with air conditioning. A long-wheelbase version, lengthened by 4 in (102 mm), was also made available in September 1957, outwardly very similar to the existing car, but offering improved leg space for rear-seat passengers.

The Silver Cloud II was introduced in 1959. Little changed externally but it now had a 6.2 L V8 engine, which pushed the weight to 2.11 tonnes. Performance was greatly improved and top speed was raised to 183 km/h (114 mph), but the main improvements were in acceleration and torque. Power steering became standard. Electrically operated windows were now available as an option.

Although the improved performance of the new car was welcomed, commentators of the time noted that the V8-engined Silver Cloud II was neither as quiet nor as smooth as the straight-six-cylinder-engined Silver Cloud I, despite the new engine's hydraulic tappet operation. The new wet-linered V8 was also a little cramped in an engine bay intended originally for a narrower unit: in order to change the sparking plugs it was necessary to remove the front wheel on the car's right side. There seems to have been a problem with crankshaft breakages in the earlier V8s: this was blamed on lack of lubrication to the bearings.

The basic architecture of the Silver Cloud II did not change between 1959 and 1963, but there were numerous minor changes implemented, notable among them a succession of improvements to the ventilation system. Interior changes in 1961 included the adoption of blue instrument lighting, the introduction of a combined indicator / headlamp flasher switch and of a handbrake warning light. A remodelled rear light assembly was introduced in May 1962 and a change to single sealed-beam headlamps was made in August 1962.

The Silver Cloud III arrived in 1963. External dimensions were slightly tweaked, the interior remodelled, the weight reduced by a little over 100 kg (220 lb) and improvements made to the engine which included fitting 2 inch SU carburettors in place of the 1¾ inch units used on the Series II Silver Cloud. The compression ratio was increased to 9:1, reflecting the higher octane levels of premium fuel in major markets, although the option of a lower 8:1 compression ratio was still offered in markets were non-availability of higher octane fuels might be an issue. Rolls-Royce, as before, refused to disclose overall engine power output, but indicated that there had been an improvement of "perhaps 7%". Increased power and weight reduction boosted speed and performance slightly. The engine now included a nitride hardened crankshaft to reflect the extra power being generated and in response to reports of broken crankshafts in the earlier V8 Silver Clouds.

The transmission was a GM Hydramatic which Rolls-Royce used under license. The headlights were grouped in a four-headlamp layout subsequently continued in the later Silver Shadow. Other external changes included a slightly increased slope of the hood / bonnet to correspond with a 1½ inch (4 cm) reduction in the height of the radiator-grill.

Between 1963 and 1966 there were no major changes. Stainless steel wheels replaced chrome-plated ones in April 1963, and an improved rear window demister was introduced in November of the same year. Wider front seats were fitted in January 1964, and five months later a revised headlamp surround now incorporated a very small RR monogram. A chrome badge reading "Silver Cloud III" in an italic font can be seen on the trunk of some examples.

As with earlier models, Rolls-Royce continued to make the Silver Cloud chassis available to traditional coach-builders. A notable version is the so-called "Chinese Eye" design, offered in Fixed Head and Drop Head Coupe style by Mulliner Park Ward. It was derived from the earlier H. J. Mulliner & Co. design for the Bentley S1 and S2 Continentals. To widen production in a diminishing market, this adaption was made available for the Bentley S3 Continental as well as for the Silver Cloud III. So, of the 328 coach-built Silver Cloud III, about 100 were of this style. 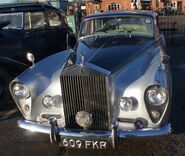 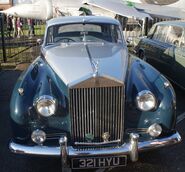 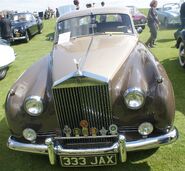 Rolls-Royce Silver Cloud
Add a photo to this gallery

Retrieved from "https://classiccars.fandom.com/wiki/Rolls-Royce_Silver_Cloud?oldid=63265"
Community content is available under CC-BY-SA unless otherwise noted.