View source
watch 01:36
We're Getting Mutants in the MCU - The Loop
Do you like this video?
Play Sound

The Rover JET 1 was the first turbine powered car. Work began in 1946 and the finished vehicle was unveiled in 1950.

During the late stages of WWII, Rover had been intended as the main producer of the new Whittle jet engine for aircraft while Rolls-Royce was working flat-out on Merlin and Griffon piston engines to power Spitfires and help win the war. Development work soon turned to a small gas turbine suitable for powering a motor car.

In 1952 JET 1 was fitted with an upgraded engine and achieved a world record speed for gas turbine cars of 152mph. When launched, the gas turbine `jet' engine was seen as a symbol of modernity and of British technical prowess. Many viewed it as the power source of the future but shortcomings began to surface such as massive fuel consumption and slowness to respond to the throttle. JET 1 was built with the engine positioned behind the seats with air intake grilles on either side of the car and exhaust outlets on the top of the tail.

During tests, the RAC recorded an acceleration speed of 0-60mph in a rather leisurely 14 seconds. JET 1 ran on petrol, paraffin or diesel oil, but consumption was sky high at 5-7 miles per gallon. Rover and the BRM Formula 1 team joined forces to produce a gas turbine-powered coupe, which entered the 1963 LeMans 24-hour race, driven by Graham Hill and Richie Ginther. It averaged 173 km/h and had a top speed of 229 km. 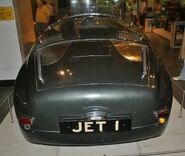