Start a Wiki
The Sunbeam Tiger was a muscle car version of the British Rootes Group's Sunbeam Alpine roadster.

The West Coast Sales Manager of Rootes American Motors Inc., Ian Garrad, realized that the Alpine's image was that of a touring car rather than a sports car, and he set about changing its image, using the recent success of the Shelby Cobra as a guide. He and Rootes' Western Service Manager Walter McKenzie measured up several V8 engines and determined that Ford's new 164 hp (122 kW) 260 cu in (4.3 L) Windsor V8 engine would fit nicely between the frame rails.

Sunbeam asked Carroll Shelby to produce one functional prototype on a budget of $10,000. Shelby's prototype was fabricated by Shelby employee George Boskoff, and the result was judged to be good enough to send to England for production evaluation.

Seeking reassurance everything would fit, a second Series 2 Alpine was handed to Ken Miles. A talented racer and fabricator in his own right, Miles had just been employed by Shelby American. Using his own shop facilities, he managed to install a 260 cu.in. V8 and two-speed automatic into the Alpine in less than a week, at a total cost of $600. Having served its feasibility study purpose, the Miles prototype was kept by Rootes Motors Inc. Los Angeles for some time until its sale to a private buyer.

After doing extensive engineering studies Rootes Group subcontracted development and pre-production testing to Jensen, located in West Bromwich, England. Jensen went on to manufacture the Sunbeam Tiger. Production reached 7,085 cars over three distinct series (the factory only ever designated two, the Mark 1 and Mark 2; however, since the official Mark 1 production spanned the changeover in body style from the Series IV Alpine panels to the Series V panels, the later cars are generally designated Mark 1A by current Sunbeam Tiger enthusiasts). Mark 2 production totaled just 536 cars, and these Tigers, with the 200 hp (150 kW) 289 cu in (4.7 L) engine, are rare today. Both the Miles and the Shelby prototypes have survived, along with a number of other historically significant Tigers.

Production of the Tiger only lasted from 1964 until Chrysler purchased Rootes in June 1967. Chrysler could not be expected to sell a car with a Ford engine, but had no suitable replacement of its own: Chrysler's small-block V8 engines had the distributor positioned at the rear of the engine, unlike the front-mounted distributor of the Ford V8; their big-block V8 had a front-mounted distributor but was significantly larger. It was impossible to fit either into the Sunbeam engine bay without major and expensive revisions, thus the Tiger was canceled.

The Tiger was arguably more practical and commercially successful than the AC Cobra that inspired it, but its road and track performance was inferior. It did however increase the sporting cachet of the Sunbeam brand.

While Sunbeam's Alpine roadster gained notoriety in 1962's Dr. No as being the first "Bond car" in the James Bond film series driven by the hero, the 1964 Tiger Series I gained some exposure on American television as the car of choice for Maxwell Smart on Get Smart. The Tiger was used for the first two seasons, and featured iconically in the opening credits with Smart screeching to a halt outside his headquarters. It would also, at times, feature in the episodes themselves, sometimes with typical modifications expected to be on cars of contemporary secret agents. After the second season, the Tiger was replaced on the show with the VW Karmann Ghia, and later the Opel GT.

The Tiger also featured in the 2008 film adaptation of Get Smart, along with the other two signature cars from the series. 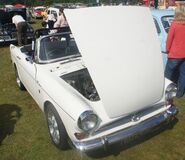 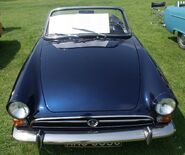 Sunbeam Tiger
Add a photo to this gallery
Retrieved from "https://classiccars.fandom.com/wiki/Sunbeam_Tiger?oldid=53249"
Community content is available under CC-BY-SA unless otherwise noted.