The Tasmin was the first production car in the world to have both a bonded windscreen and also to incorporate the aerial in the rear screen heater element.

The suspension and steering was sourced from the Ford Cortina, with TVR engineered rear wishbones. Gearboxes were from the Cortina and Sierra. Brakes were discs all round, with the front units from the Granada. The differential was from the Jaguar XJ-S. The engine was the Ford 2.8 Cologne V6 with Bosch fuel injection producing 160 bhp (119 kW; 162 PS).

An automatic gearbox was available, making it the first TVR to have this as an option. The styling of the car was by Oliver Winterbottom who had previously styled the Lotus Elite S2. Beside the Cologne V6 engine the Tasmin was also available with a 2.0 litre Ford Pinto. This car, presented in late 1981, was called the Tasmin 200 and was an attempt to make a car cheaper than the standard Tasmin 280i. It was priced at under £10,000, but with an engine producing only about 100 bhp (75 kW; 101 PS) it wasn't a big success. Only 16 Tasmin 200 coupes and 45 convertibles were made in total. In 1981 a series II car appeared, a vast improvement over the series I. In 1984 the Tasmin name was dropped and the car was renamed TVR 280i, although the name remained in use within the TVR factory. Early 350i's were also referred to as the "Tasmin 350i" TVR's consistently inconsistent badging policy resulted in the cars appearing as Tasmins, Tasmin 280i's or just plain 280i's as the Tasmin name was dropped.The 2.8-litre "Cologne" V6 had already been certified for US sales, and thus TVR returned to the US market after a six year hiatus.

The Tasmin was the last TVR to be exported to the USA, with the last car brought over in 1987, this being a series II 280i. A number of reasons are cited for TVR's withdrawal from the US. These allegedly include a deteriorating relationship with the import agents and the distribution network, warranty problems and liability insurance premiums rising from $160K to over $1M. 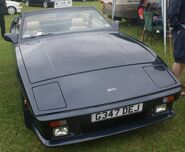 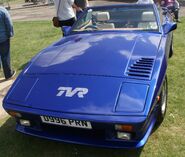 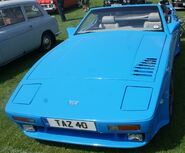 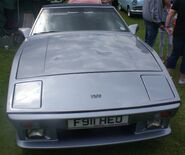 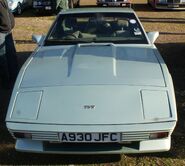 TVR Tasmin 280i
Add a photo to this gallery
Retrieved from "https://classiccars.fandom.com/wiki/TVR_Tasmin?oldid=58826"
Community content is available under CC-BY-SA unless otherwise noted.