The A-team was an American TV Show that ran from 1983 until 1987. It was a huge success and their van (pictured right) is instantly recognisable.

The A-team were a command unit that served in the Vietnam War. They were set up for a crime they didn't commit and wrongly convicted. They escaped the high security prison in which they were detained and went on the run.

It starred George Peppard, Mr. T, Dirk Benedict and Dwight Schultz. They played a team of mercanaries that were wrongly convicted of 'a crime they did not commit'. They helped the little guy by 'survivng as soldiers as fortune' and humiliating anyone who they were hired to.

They used their army training and cunning to stay one step ahead of the Military Police who were chasing them for escaping the high security prison.

Hannibal Smith was the leader of the A-team, he was the planner, leader and a master of disguise. Hannibal's catchphrase was 'I love it when a plan comes together'. He was often seen with a cigar in his mouth.

Templeton 'Face' Peck was the ladies man. He used his charm and good looks to get what ever he wanted. He drove a Corvette and could often be seen smoking cigarettes.

Howling Mad Murdock was the pilot and mentally insane. He often escaped the mental hospital that he lived at to help his buddies.

B.A. Baracus was the badass of the group. He had a mohawk and drove the van. He had a fear of flying and didn't get on with murdock very well. He often threatened to kill him and his catchphrase is 'Pity the fool'. 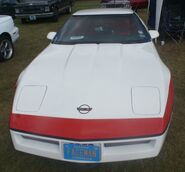 Face's Corvette
Add a photo to this gallery
Retrieved from "https://classiccars.fandom.com/wiki/The_A-team?oldid=61126"
Community content is available under CC-BY-SA unless otherwise noted.