The name MR2 stands for either "mid-ship, run-about, 2-seater" or "mid-engine, rear-wheel-drive, 2-seater. The small and light MR2 was something no one had expected from Toyota, known for their economical and practical family cars.

The MR2 derived from a 1976 Toyota design project with the goal of a car which would be enjoyable to drive, yet still provide good fuel economy – not necessarily a sports car. Design work began in 1979 when Akio Yoshida from Toyota's testing department started to evaluate alternatives for engine placement and drive method, finalizing a mid-transverse engine placement. Toyota called the 1981 prototype SA-X.

From its original design, the car evolved into a sports car, and further prototypes were tested both in Japan and in California. Significant testing was performed on race circuits including Willow Springs, where former Formula One driver Dan Gurney tested the car.

All three generations were in compliance with Japanese Government regulations concerning exterior dimensions and engine displacement. The MR2 appeared around the same time as the Honda CR-X, the Nissan EXA, the VW Scirocco from Europe, and the Pontiac Fiero and Ford EXP from North America.

Toyota debuted its SV-3 concept car in October 1983 at the Tokyo Motor Show, gathering press and the audience publicity. The car was scheduled for a Japanese launch in the second quarter of 1984 under the name MR2.

In Japan, the MR2 was marketed exclusively via Toyota's Vista Stores, rebranded in 1998 as Toyota Netz Store. At its introduction in 1984, the MR2 won the Car of the Year Japan.

As Toyota engineered the MR2 to accommodate a 2-liter engine, its primary features included its light body (as low as 2,095 lb (950 kg) in Japan and 2,350 lb (1066 kg) in the US), strong handling and lightly powered, small-displacement engine. The car is often referred to as the AW11, referring to the chassis code of the most common 1.6-litre, A-engined versions.

The MR2's suspension and handling were designed by Toyota with the help of Lotus engineer Roger Becker. Toyota's cooperation with Lotus during the prototype phase can be seen in the AW11, and it owes much to Lotus's sports cars of the 1960s and 1970s. Toyota's active suspension technology called TEMS was not installed. With five structural bulkheads, the MR2 was quite heavy for a two-seater of its size.

Toyota employed the naturally aspirated 4A-GE 1,587 cc inline-four engine, a dual overhead-cam, four-valve-per-cylinder motor, borrowed from the E80 series Corolla. This engine was also equipped with DENSO electronic port fuel injection and a variable intake geometry ("T-VIS"), giving the engine a maximum power output of 112 hp (84 kW) in the US, 128 hp (95 kW) in the UK, 116 or 124 PS (85 or 91 kW; 114 or 122 hp) in Europe (with or without catalytic converter), 118 hp (88 kW) in Australia and 130 PS (96 kW; 128 hp) in Japan. Japanese models were later downrated to 120 PS (88 kW; 118 hp). The engine had already been introduced earlier on the AE86 Corolla, gathering a lot of positive publicity. A five-speed manual transmission was standard and a four-speed automatic was optional.

In 1986 (1988 for the US market), Toyota introduced a supercharged engine for the MR2. Based on the same block and head, the 4A-GZE was equipped with a small Roots-type supercharger and a Denso intercooler. T-VIS was eliminated and the compression ratio was lowered to 8:1. It produced 145 hp (147 PS; 108 kW) @ 6400 rpm and 186 N⋅m (137 lb⋅ft) @ 4400 rpm and accelerated the small car from 0 to 100 km/h (0 to 62 mph) in 6.5 to 7.0s. The supercharger was belt-driven but actuated by an electromagnetic clutch, so that it would not be driven except when needed, increasing fuel economy. Curb weight increased to as much as 2,494 lb (1,131 kg) for supercharged models, due to the weight of the supercharger equipment and a new, stronger transmission. A fuel selector switch was also added in some markets, to allow the car to run on regular unleaded if required to. In addition to the new engine, the MR2 SC was also equipped with stiffer springs, and received special "tear-drop" aluminium wheels. The engine cover had two raised vents (only one of which was functional) that visually distinguished it from the naturally aspirated models. It was also labeled "SUPER CHARGER" on the rear trunk and body mouldings behind both doors. This model was never offered in European or Australian markets, although some cars were privately imported.

MK1a and MK1b are unofficial designations, but are frequently used by owners and vendors to distinguish between early production vehicles and later face-lifted models. While there are considerable differences detailed below, the most notable being that rear suspension components are not interchangeable between the MK1a and MK1b cars.

While Toyota's front-engine, rear-drive Celica rally cars proved dominant in the African Group B rallies of the 1980s, they were at a disadvantage on the twistier European stages. Thus in 1985 Toyota Team Europe started a rally project codenamed "222D" based on the MR2, for competition in Group S and potentially Group B as well. Though somewhat similar on the outside, it's clear that it shared nothing with the production car. Little is known about this project because it never competed before Group B was canceled in 1986.

During a surprise appearance at the 2006 Goodwood Festival of Speed, Toyota drove and displayed a black 222D. The race-ready car weighed around 750 kilograms (1,700 lb) and its transverse-mounted, four-cylinder, turbocharged engine (what appears to be a 503E race engine, though other prototypes may have used the 4T-GTE) was reported to produce as much as 750 horsepower (560 kW). A V6-powered prototype was also rumored to exist, but has never been seen in public. 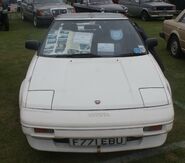 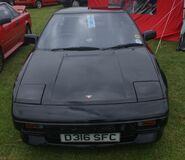 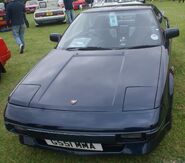 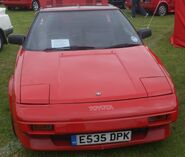 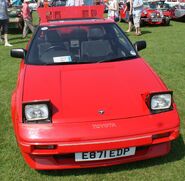 Toyota MR2 Mark 1
Add a photo to this gallery

The MR2 went through a redesign in 1989 (though North America did not receive them until late 1990 as 1991 models). The new car was larger, weighed 350 to 400 pounds (160 to 180 kg) more than its predecessor due to having a more luxurious and spacious cabin, larger engine sizes, sturdier transaxle, and a more durable suspension setup. The overall design of the automobile received a more rounded, streamlined styling, with some calling the MR2 SW20 a "baby Ferrari" as well as "poor man's Ferrari", since the car did have several design cues borrowed from Ferrari.

Like the AW11 before it, Toyota spent countless hours fine-tuning the handling capabilities of the SW20, seeking advice from professional race car drivers, including Dan Gurney of Formula One, NASCAR, and Le Mans fame.

When the AW11 was still in production and before the SW20 was officially shown to the public, several rumors were spreading stating that Toyota was building yet another mid-engine sports car, one that would have a 3.0L V6 engine that could directly compete with the 348, though this specific rumor was later shot down under the pretense that such a car would belong under the Lexus branding.

Evolution of the Toyota MR2

1 of 2
Add photo
Retrieved from "https://classiccars.fandom.com/wiki/Toyota_MR2?oldid=69426"
Community content is available under CC-BY-SA unless otherwise noted.