As was typical for the manufacture of cars in this era, the bodywork was fitted onto a separate structural chassis, but for the Spitfire, being designed as an open top or convertible sports car from the outset, the ladder chassis was reinforced for additional rigidity by the use of structural components within the bodywork. The Spitfire was provided with a manual hood for weather protection, the design improving to a folding hood for later models. In addition factory manufactured hard-tops could also be purchased and fitted for use in winter months.

The Triumph Spitfire was originally devised by Standard-Triumph to compete in the small sports car market which had opened up with the introduction of the Austin-Healey Sprite. The Sprite had used the basic drive train of the Austin A30/35 in a light body to make up a budget sports car; Triumph's idea was to use the mechanicals from their small saloon, the Herald, to underpin the new project. Triumph had one advantage, however; where the Austin A30 range was of unitary construction, the Herald featured a separate chassis. It was Triumph's intention to cut that chassis down and clothe it in a sports body, saving the costs of developing a completely new chassis/body unit.

Italian designer Michelotti (who had already penned the Herald) was commissioned for the new project, and came up with a traditional, swooping body. Wind-up windows were provided (in contrast to the Sprite/Midget, which still featured sidescreens, also called curtains, at that time), as well as a single-piece front end which tilted forwards to offer unrivalled access to the engine. At the dawn of the 1960s, however, Standard-Triumph was in deep financial trouble, and unable to put the new car into production; it was not until the company was taken over by the Leyland organization funds became available and the car was launched. Leyland officials, taking stock of their new acquisition, found Michelotti's prototype hiding under a dust sheet in a corner of the factory and rapidly approved it for production.

Spitfire 4 or Mark I

The production car changed little from the prototype, although the full-width rear bumper was dropped in favour of two part-bumpers curving round each corner, with overriders. Mechanicals were basically stock Herald. The engine was an 1,147 cc (1.1 l) 4-cylinder with a pushrod OHV cylinder head and 2 valves per cylinder, mildly tuned for the Spitfire, fed by twin SU carburettors. Also from the Herald came the rack and pinion steering and coil-and-wishbone front suspension up front, and at the rear a single transverse-leaf swing axle arrangement. This ended up being the most controversial part of the car: it was known to "tuck in" and cause violent over steer if pushed too hard, even in the staid Herald. In the sportier Spitfire (and later the 6-cylinder Triumph GT6 and Triumph Vitesse) it led to severe criticism. The body was bolted to a much-modified Herald chassis, the outer rails and the rear outriggers having been removed; little of the original Herald chassis design was left, and the Spitfire used structural outer sills to stiffen its body tub.

The Spitfire was an inexpensive small sports car and as such had very basic trim, including rubber mats and a large plastic steering wheel. These early cars were referred to both as "Triumph Spitfire Mark I" and "Spitfire 4", not to be confused with the later Spitfire Mark IV.

For 1964 an overdrive option was added to the 4-speed manual gearbox to give more relaxed cruising. Wire wheels and a hard top were also available.

In March 1965 the Spitfire Mark II was launched. It was very similar to the Mark I but featured a more highly tuned engine, through a revised camshaft design, a water-cooled intake manifold, and tubular exhaust manifold, increasing the power to 67 bhp (50 kW) at 6000 rpm. The coil-spring design clutch of the Mark I was replaced with a Borg and Beck diaphragm spring clutch. The exterior trim was modified with a new grille and badges. The interior trim was improved with redesigned seats and by covering most of the exposed surfaces with rubber cloth. The original moulded rubber floor coverings were replaced with moulded carpets.

The Mark III, introduced in March 1967, was the first major facelift to the Spitfire. The front bumper was raised in response to new crash regulations, and although much of the bonnet pressing was carried over, the front end looked quite different. The rear lost the overriders from the bumper but gained reversing lights as standard (initially as two separate lights on either side of the number plate, latterly as a single light in a new unit above the number plate); the interior was improved again with a wood-veneer instrument surround. A folding hood replaced the earlier "build it yourself" arrangement. For most of the Mark III range, the instrument cluster was still centre-mounted (as in the Mark I and Mark II) so as to reduce parts bin counts (and thereby production costs) for right-hand and left-hand drive versions.

On 8 February 1968, Standard-Triumph General Manager George Turnbull personally drove the 100,000th| Triumph Spitfire off the end of the Canley production line. More than 75% of the total production had been exported outside the UK, including 45% to the USA and 25% to mainland European markets.

Starting in 1969, however, US-bound models had to be changed to comply with new safety/emission regulations; models produced after 1969 are sometimes referred to as "federal" Spitfires. The changes included a slight decrease in power (68 bhp) due to emissions control, the instrument panel was moved in front of the driver, and new seats were introduced with integrated headrests to help against whiplash. Also the wood dash was replaced with a matt black finish.

The Mark IV brought the most comprehensive changes to the Spitfire. It featured a completely re-designed cut-off rear end, giving a strong family resemblance to the Triumph Stag and Triumph 2000 models, both of which were also Michelotti-designed. The front end was also cleaned up, with a new bonnet pressing losing the weld lines on top of the wings from the older models, and the doors were given recessed handles and squared-off glass in the top rear corner. The interior was much improved: a proper full-width dashboard was provided, putting the instruments ahead of the driver rather than over the centre console. This was initially black plastic however was replaced by a wooden one in 1973.

The engine continued at 1296 cc, but in 1973 was modified with larger big-end bearings to rationalize production with the TR6 2.5 litre engines, which somewhat decreased its "revvy" nature; there was some detuning, to meet new emissions laws, which resulted in the new car being a little tamer than the Mark III. Peak power was reduced to 63 bhp (47 kW) at 6000 rpm, and the peak torque was now 69 lb·ft (94 N·m) at 3500 rpm. With the overall weight also increasing to 1,717 lb (779 kg) the performance dropped as a consequence, 0 to 60 mph (97 km/h) now being achieved in 16.2 seconds and the top speed reducing to 90 mph (140 km/h). The overall fuel economy also dipped to 32mpg. The gearbox gained synchromesh on its bottom gear.

An all-new hardtop was also available, with rear quarter-lights and a flatter rear screen.

By far the most significant change, however, was to the rear suspension, which was de-cambered and redesigned to eliminate the unfortunate tendencies of the original swing-axle design. The Triumph GT6 and Triumph Vitesse had already been modified, and the result on all these cars was safe and progressive handling even at the limit.

In 1973 in the United States and Canada, and 1975 in the rest of the world, the 1500 engine was used to make the Spitfire 1500. Although in this final incarnation the engine was rather rougher and more prone to failure than the earlier units, torque was greatly increased by increasing the cylinder stroke to 87.5 mm (3.44 in), which made it much more drivable in traffic. The reason for the engine problems was the continued use of three main bearings for the crankshaft.

The American market Spitfire 1500 is easily identified by the big plastic over-riders and wing mounted reflectors on the front and back wings. The US specification models up to 1978 still had chrome bumpers, but on the 1979 and 1980 models these were replaced by black rubber bumpers with built-in over-riders. Chassis extensions were also fitted under the boot to support the bumpers.

Detail improvements continued to be made throughout the life of the Mark IV, and included reclining seats with "chequered brushed nylon centre panels" and head restraints, introduced for domestic market cars early in 1977 along with a new set of column stalk operated minor controls (as fitted already in the TR7) replacing the old dashboard mounted knobs and switches. Also added for the model's final years were a wood dash, hazard flashers and an electric screen washer, in place of the previous manual pump operated ones. Options such as the hard top, tonneau cover, map light and overdrive continued to be popular, but wire wheels ceased to be available.

The 1980 model was the last and the heaviest of the entire run weighing in at 1,875 lb (850.5 kg). Base prices for the 1980 model year were $5,995 in the US and £3,631 in the UK. The last Spitfire, an Inca Yellow UK-market model with hardtop and overdrive, rolled off the assembly line at Canley in August 1980, shortly before the factory closed. It was never sold and is now displayed at the British Motor Heritage museum at Gaydon. 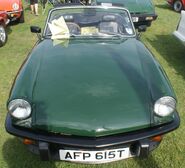 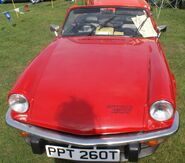 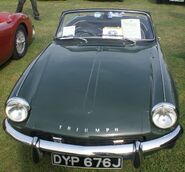 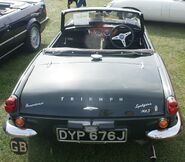 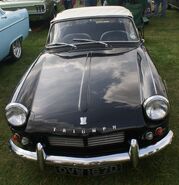 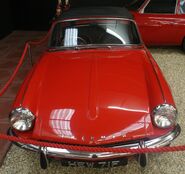 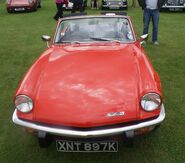 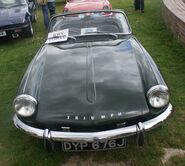 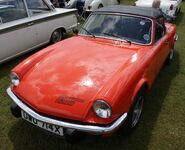 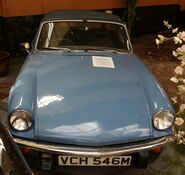 Triumph Spitfire
Add a photo to this gallery

Retrieved from "https://classiccars.fandom.com/wiki/Triumph_Spitfire?oldid=63165"
Community content is available under CC-BY-SA unless otherwise noted.