Start a Wiki
The Triumph TR8 is an eight-cylinder version of the "wedge-shaped" Triumph TR7 sports car, designed by Harris Mann, and manufactured by British Leyland (BL), through its Jaguar/Rover/Triumph (JRT) division. Because of its outstanding performance, the TR8 was often dubbed the "English Corvette". The majority of TR8s were sold in the United States and Canada.

A more powerful V8-engined version of the TR7 was planned in the early stages of the TR7's development, a prototype being produced in 1972. However, British Leyland's financial state, labour problems and lack of engines as MG and Range Rover had first priority delayed the project. By 1978 some 145 prototype cars were built with V8 engines (and usually automatic transmissions). These "anonymous" TR8s (no identifying badges, and all coupes) were evaluated for British Leyland by various dealers and then sold off as used cars.

The TR8 did not use Triumph's own single overhead cam V8 as found in the Stag due to its weight and service record but instead shared its Rover V8 engine with the Rover SD1. The engine itself was derived from an early 1960s Buick/Oldsmobile all-aluminum 215 cu in (3.5 L) V8 unit that Rover acquired from General Motors in the mid-60s. History has shown this engine to be an extremely reliable, flexible, and robust powerplant after BL developed a better manufacturing process. TR8s were initially fitted with twin Zenith-Stromberg carburetors. However, all 1980 models sold in California, all 1981 models (of which only 352 were produced including 20 cars for the UK market) and all 1982 models (of which all 69 went to Canada) featured a Bosch L-jetronic fuel injection system with a specially designed Lucas fuel injection computer (ECU). The carburetor model was rated at 133 bhp (99 kW; 135 PS) (at around 5000 rpm) and the fuel injected at either 137 or possibly 148 bhp[1]delivering 0–60 mph times in the low 8 seconds. Other differences between the TR8 and TR7 are upgraded brakes, revised axle ratio (3.08:1 on the TR8 and all automatic TR7s), battery moved to the trunk, alloy wheels, leather steering wheel and a few minor trim changes.

Pre-production TR8 coupes produced from 1978 to 1980 are quite rare; perhaps only 400 TR8 coupes ever existed (from records kept by members of the North America-based wedge club). In 1979, a Michelotti re-designed TR8 Drophead (convertible) was introduced, and all subsequent TR8s were convertibles. Total worldwide production, as best as can be determined throughout all the labour turmoil at the time, is only around 2750, give or take a "handful". (Richard Connew went through the records at British Motor Heritage Industry Trust a few years ago and counted 2746.) Other estimates exist. The German version of this page claims 2722 and cites the TR Register-Austria as source; 2815 is the number quoted in an article from Classic & Sports Car, March 1986. The TR7 and TR8 were made until October 1981 when production ceased.

Very few genuine TR8s exist outside of the United States and Canada. In other countries the TR7 is often converted to a "TR7V8" with the same ubiquitous Buick/Rover 3.5 litre V8 powerplant used in original factory TR8s. In Australia a popular TR7V8 conversion is to use the 4416 cc version of this engine that had been developed for the Leyland P76.

In North America, the TR8 originally sold for around $11,000. A current rough estimate of the number of these cars remaining (taken from the old TR8 Car Club of America's Registry of unique VINs), the World Wide TR7 TR8 Owners Club and the TR Drivers Club UK is around 750 convertibles and 190 coupes. Work is progressing on getting an even better estimate by the newly reformed Triumph Wedge Owners Association.

As of Q1 2011 there were approximately 17 licensed and 33 SORN TR8s registered with the DVLA. Out of these 50 cars, only 2 are automatic.

Despite their low production numbers, TR8s have an interesting racing history. John Buffum successfully raced one as a rally car in the late 1970s. Bob Tullius of Group 44 fame dominated SCCA racing in 1979 in one, so much so that the SCCA added enough "reward" weight to the car that Tullius left Trans Am and successfully competed in IMSA GT instead. TR8s ran successfully in the SCCA's Showroom stock series being campaigned by Morey Doyle (Regionals) and Ted Schumacher (Nationals). Schumacher had great success in the Playboy/Escort Endurance series with his car. Starting the last race of the year, Schumacher was 4th in the overall point standings (just 3 points away from 1st) when an accident ruined their chances; nevertheless, Schumacher still ended up 7th in the manufacturer's points for that year, all with no official factory help. Presently, at least three cars are being run in SCCA's ITS class. Morey Doyle and his son Andy run their TR8s in the Midwest Region. Jeff Young runs his green convertible in the Southeast Division. 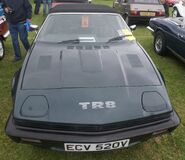 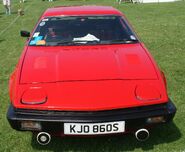 Triumph TR8
Add a photo to this gallery

Retrieved from "https://classiccars.fandom.com/wiki/Triumph_TR8?oldid=61147"
Community content is available under CC-BY-SA unless otherwise noted.