Start a Wiki
The Astra is a model name that has been used by Vauxhall, the British subsidiary of General Motors (GM), on their small family car ranges since 1979. Astras are very similar to vehicles offered by GM's German subsidiary Opel in most other European countries. For its first two generations, the nameplate was applied to right-hand drive versions of the Opel Kadett for use in the UK. Since 1991, Opel has used the Astra nameplate on its B/C-platform. General Motors' Saturn division in the US also offered the Astra as a captive import from late 2007 until Saturn was discontinued following the GM's 2010 bankruptcy.

The Astra name originated with Vauxhall's 1980 model, though the car was launched almost a year earlier as the Opel Kadett D. This model replaced the Vauxhall Viva in the UK, along with some versions of the Vauxhall Chevette. However, the Chevette (itself based on the previous generation Kadett C) remained available for several years afterwards until the Vauxhall Nova was launched. The Astra was Vauxhall's first model to have front wheel drive. Not all trim levels were available with all body styles. Confusingly in the British market, both the Kadett D and the Astra were sold alongside each other until the consolidation of Opel and Vauxhall dealerships in the early 1980s, when the Opel badged versions were dropped.

Production began at Opel's West German plant at Bochum in August 1979, and the first British customers took delivery of their cars in February 1980.

The overhead-camshaft engine was a huge leap forward from the earlier generation of small engines used in Vauxhall and Opel cars in terms of power, economy and refinement. It was initially available in 1300 and 1600 forms, and later an 1800 fuel-injected version was added, used in the Mk 1 Astra GTE model, introduced in 1983. This version of the Astra was a quick and stylish alternative to the Ford Escort XR3, Volkswagen Golf GTI and Fiat Strada 105TC.

Vauxhall now appeared to have a serious rival for the Volkswagen Golf at just about every level. The car featured a new unified engine for Vauxhall/Opel, featuring an all-aluminium head, overhead camshaft and hydraulic valve lifters, and it quickly became popular with buyers. A 1200 cc version which used the older Opel OHV engine was also available.

There were three body styles for the first generation Astra: hatchback, so-called "saloon", and estate, all available with two or four side doors. The saloons were styled exactly like the hatchbacks, except for a different rear window above a bootlid; from the side they looked almost indistinguishable from the hatchback, with no protruding notch at the rear. The saloon version was replaced by the Belmont saloon based on the Astra MK2 in early 1986.

The white 1800GTE was the first UK car to be 'colour coded' with body trim that matched the base colour of the car, this included wheel arch extensions, front side and rear lower skirts, mirror covers, bumpers and even the alloy wheels were painted white. The black, silver and red versions of the GTE also had colour coding but had the more conventional black bumpers and silver painted alloy wheels.

There was also a van version which was badged the Bedford Astravan — the Bedford brand at that time being used for GM's commercial vehicles in Britain. Unlike the previous Opel T-Car, no Coupé was offered.

Sales of this first Astra were strong, and gave Vauxhall a much-needed boost in the small family car sector after several years of declining sales with the Viva HC. It soon overtook the Austin Allegro as Britain's second most popular small family car, although it was still a long way behind the Ford Escort in terms of sales success.

The Mark 2 Astra was launched on 17 October 1984. It used the same range of engines and running gear as the Mark 1, but with a completely restyled body with better aerodynamics. It was voted 1985 European Car of the Year.

Long-lived, the Mark 2 was available in estate, hatchback, saloon and cabriolet versions. The saloon was launched in January 1986 and sold as the Vauxhall Belmont; this trend to brand saloon models independently of hatchbacks was also used by other manufacturers of the period, with examples including the Ford Orion and the Volkswagen Jetta. However, this strategy was mostly unsuccessful, as this was Vauxhall's only attempt at badging its hatchback-based saloon as a separate model, and Ford rebadged its Orion range as Escorts in September 1993.

A new GTE using a 2 L fuel injected engine was also introduced, and early models of these featured an all electronic dash with digital speedometer. Analogue instruments were an optional extra, but were very rarely selected over the digital dash. Vauxhall's twin-camshaft version of the engine, the C20XE, had a high performance version of the GTE created around it. This engine was originally released in Europe where it developed 156 ps (153.9 bhp) in standard form. When the GTE 16v arrived in the UK, it was subject to stricter emissions regulations; to meet these, a new exhaust manifold was applied to the C20XE, which robbed the engine of 6ps. The resulting 150ps (148 bhp) offered sprightly performance, though a common criticism is that the handling was never good enough for the engine. The limited-edition "Champion" Astras from 1990 were fitted with the same C20XE "redtop" engines (so called because of their red spark plug cover), along with Leather interiors.

The Mark 2 Astra sold well in the UK, and although it was never able to outsell the Ford Escort, it came closer than any other similar-sized car to achieving this.

In 2005, a survey found the two most stolen cars in Britain to be the Vauxhall Belmont and the Vauxhall Astra Mark 2, with more than 1 in 13 Belmonts stolen. 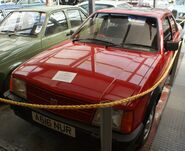 Vauxhall Astra GTE
Add a photo to this gallery
Retrieved from "https://classiccars.fandom.com/wiki/Vauxhall_Astra?oldid=69525"
Community content is available under CC-BY-SA unless otherwise noted.