Start a Wiki
The Vauxhall Carlton was an executive car that was sold by Vauxhall in the United Kingdom from 1978 to 1994.

The first Vauxhall Carlton was introduced in late 1978 as a replacement for the ageing VX1800/VX2000 saloons. Based on the Opel Rekord, but with Vauxhall's typical "droop snoot" front end that featured no traditional grille, it was a traditional large saloon or estate with rear-wheel drive and a spacious, comfortable interior and was available in "L" trim only. Power came from a 2.0 litre carburettor petrol engine which gave reasonable performance, refinement and economy. There were some impressive options available, including central door locking, alloy wheels and electric windows, which in the late 1970s were relatively plush equipment on mainstream cars.

Relationship with other models

A facelift for the 1983 model year saw the disappearance of the droop snoot front, in favour of a more traditional (though still angled) grille shared with the equivalent Opel. This also marked the end of UK sale of the Opel Rekord as the Opel brand was being phased out in the UK. The 1983 facelift also saw the introduction of a wider engine range consisting of a 1.8 L carburettor, 2.0 L carburettor and 2.3 L diesel. A wider range of trim levels consisting of "L", "GL" and "CD" were also introduced at this time. A 2.0 L fuel injection engine was introduced for the 1984 model year and was replaced by a 2.2 L fuel injection engine for 1985.

Opel chose to name its 1986 replacement car in this segment Omega rather than Rekord. Vauxhall stayed with the Carlton name. On its launch at the end of 1986 the Vauxhall Carlton / Opel Omega saloon and estate range earned itself the accolade of European Car of the Year.

Relationship with other models

Again there was a lengthened version of the Carlton (and Omega), this time known in both Opel and Vauxhall forms by the same name: Senator.

New to the Carlton's line-up with the Mark II were two straight-6 engines with 2.6 and 3.0 litres. Originally, these were 12-valve engines, but later models offered a 24-valve version of the 3 litre six, producing much more power and torque. As well, Vauxhall used the "Dual-Ram" intake manifold, which lets the car breathe as two separate three-cylinder engines below 4,000 rpm, but changes the intake manifold profile at 4000 rpm to increase the runner length, thus increasing total engine output.

In June 1992 two teams from Horley Round Table, Surrey, UK, set a Guinness World Record time of 77 hours 34 minutes, driving a total 6,700 km across the then 12 EC countries in two Vauxhall Carlton 24V 3000 GSi's (J870 FFM and J751 DYC). The Carltons were provided by Vauxhall Motors and the record attempt was also supported by Mobil Oil and the Royal Automobile Club. 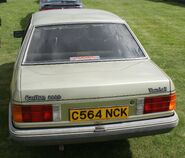 Vauxhall Carlton GL S
Add a photo to this gallery
Retrieved from "https://classiccars.fandom.com/wiki/Vauxhall_Carlton?oldid=55706"
Community content is available under CC-BY-SA unless otherwise noted.