The Vauxhall Cresta is a British car first introduced in 1954 by Vauxhall Motors as an upmarket version of the Vauxhall Velox (itself a six cylinder version of the Vauxhall Wyvern). When the Wyvern was replaced in 1957 the new larger car took the Cresta name. This car, code named the PA version one, was one of the more elegant British cars of the late 1950s even though it was not sufficiently upmarket for it to be driven by those who considered themselves the elite of British society. Rock stars could drive them; barristers and doctors would not. This was ironic, because Queen Elizabeth II for many years used a bespoke Estate version as personal transport.

The Vauxhall Velox had been introduced in 1948 with a new version in 1951 that looked very much like a Chevrolet of the era. The Cresta E version, launched in 1954, had the same 2262 cc six cylinder engine in the same state of tune but scored over the Velox in having a choice of leather or fabric upholstery, optional two tone paintwork, a heater as standard, a small electric fascia mounted clock, a cigar lighter, a lamp automatically illuminating the boot / trunk when opened and a vanity mirror on the inside of the front passenger's sun visor along with a special ornamental badge above the V (for Vauxhall) badge on the nose of the car. A radio was optional.

The PA Cresta is probably the most well-known version. It mimicked the American fashion for giant tailfins, wrap-around windows and whitewall tyres but in an understated way compared to the Cadillacs and Buicks of the time. It bears a strong resemblance to a 1955 Packard Caribbean. All factory-built PAs were 4-Door Saloons, the Estate cars were converted by Friary of Basingstoke, Hampshire and are rare cars today.

The car had independent front suspension using coil springs and an anti-roll bar with a rigid axle and semi elliptic leaf springs at the rear. The Lockheed brakes used 9 in (230 mm) drums all round. The 2262 cc six cylinder engine had pushrod operated overhead valves and a compression ratio of 7.8:1 (a low compression 6.8:1 version was available) and produced 82.5 bhp (61.5 kW) at 4400 rpm. A single Zenith carburettor was used. The transmission had three forward speeds.

Of the various changes made during the PA Cresta's production life, the most significant was the replacement of its 2262 cc engine with a 2651 cc unit. The new engine retained the straight-six format of the old one, but claimed maximum power output increased increased very substantially from 72 PS at 4400 rpm to 104 ps at 4800 rpm.

It was well equipped with leather and nylon upholstery for its bench front and rear seats and woven pile carpet. A heater was fitted as standard. The radio remained an option on the home market. Other options included fog lamps, reversing light, locking filler cap and external mirrors. In order to keep the front floor clear to seat six people the handbrake lever was mounted under the dashboard and the gearchange lever was column mounted. The car could be ordered painted in either single or two tone colours

During the 1970s many PA Crestas were modified and customised. The model was very popular with fifties revivalists; many were driven by teddy boys and were very much seen as part of the rock 'n' roll image. A 1960 PA Cresta features in the 1981 video for Ghost Town by The Specials. The band are also wearing 50s style clothing in the video.

Today the PA Cresta is a recognised classic, with the other variants perhaps less appreciated but gaining recognition. One famous PA owner in the late 1950s was Don Lang.

The PB was a major styling revision, completely eliminating the tail fins, with a flat bonnet and generally more conservative styling. It initially featured a 2.6 litre straight-six engine, with a 3.3 litre in its last year of production though the 2.6 continued in some export markets for tax reasons. The gearbox was still three speed with column change but an overdrive was available. The 3.3 litre cars had a three-speed column change box standard with four-speed floor change an option. Three-speed hydramatic automatic transmission was available with both engines but this was changed to the two-speed Powerglide unit towards the end of the 3.3-litre PB run. Servo assisted brakes, disc at the front were fitted.

The last of the series, the PC, was introduced for the London Motor Show in October 1965. No longer offered as a lower spec. Velox version, it was designated PCS (standard), PCD (Deluxe) and PCE (Executive), this last having its own name, 'Viscount'. It was a different car, larger and styled with the coke-bottle look that would be further enhanced with the FD Victor series, it was now, quite clearly, a slightly reduced size Chevrolet Impala. It was similar to the Australian Holden HR, but larger and better trimmed, and featured the 3.3 litre straight-six engine for its entire seven-year production run. Though a small-block V8 would drop straight in, this option was never offered in Europe. Initially, the three-speed column-shift manual transmission was standard with optional overdrive; four-speed manual and two-speed Powerglide were also optional. Later cars, from about 1971 came with four-speed manual or three-speed automatic, both with floor shift and bucket seats.

General Motors New Zealand ran its own assembly line in Trentham, near Wellington from 1966 to 1971. The one 'base' Cresta model built changed very little during that time and did not receive the facelift that appeared on the UK market around 1970. However, at some point in production, the brake system was upgraded to a tandem master cylinder to improve the braking, this upgrade became a standard fitment on the New Zealand models. A few twin headlamp Cresta Deluxe, Viscount and estate car versions were also imported built-up from the UK.

The facelifted model, never offered in New Zealand, had twin head lamps as standard and a more integrated dash panel. Floor shift, rather than column change, was also a standard fitment.

The De-Luxe version had four headlamps in place of the two fitted on the (much rarer) base models.

In January 1967 domestic market deliveries began of the Vauxhall Cresta estate car. This vehicle resulted from a conversion by Martin Walter of Folkestone, a firm better known for their (primarily Bedford based) Dormobile motorhome conversions. The estate version was 2½ inches (5 cm) higher than the saloon due to a combination of heavy-duty rear suspension, an increase in the outer diameter of the tyres (to 7.00-14 in from 5.90-14in) and the modified roof line. The Cresta estate was initially offered in the UK at £1,507, which represented a premium of around 40% over the price of the equivalent saloon. The long established Humber Hawk estate and recently introduced Ford Zephyr estate carried UK sales prices of £1,342 and £1,379 respectively. The Cresta estate offered a load platform length of 47 inches (119 cm) which increased to an impressive 76 inches (193 cm) when the back seat was folded down, but Vauxhall's contender was never priced to be a big seller and the last estate cars were made in 1968.

Introduced early in June 1966, with the same engine and mechanical components as the Cresta PC, the Viscount was the super de-luxe version of it. It was supplied as standard with power steering, electric windows, reclining seats, a vinyl roof, walnut dashboard, inertia reel seat belts front and back, and even a heated rear window. Areas of the grille and headlamp surrounds were blacked out to give a classier look and the tail-lights had a chrome overlay. The dark green, blue or maroon paintwork featured simulated, hand painted coachlines, along each flank, to give the car a coachpainted appearance. The outer pair of the quad, five inch, sealed beam headlamps were twin filament, giving the car four main beams. The Viscount also came with wider tyres than the Cresta (7.00-14in rather than 5.90-14in). Some PC 3.3 had twin tail-pipes as this was a performance option of the time. The standard transmission option was GM's Powerglide 2-speed automatic system, but a four speed manual gearbox was available, initially on the UK market at a saving of £85: elsewhere the manual gear box was a no-cost option. In the third quarter of 1970 the two-speed Powerglide automatic was replaced with a GM 3-speed automatic transmission.

Some South African versions were fitted with a Chrysler V8 as an option - one of the rare times a General Motors product used a direct rival's engine. 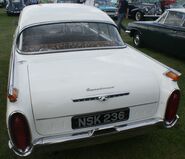 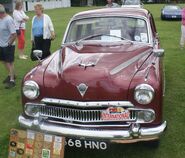 Vauxhall Cresta
Add a photo to this gallery
Retrieved from "https://classiccars.fandom.com/wiki/Vauxhall_Cresta?oldid=71394"
Community content is available under CC-BY-SA unless otherwise noted.