Start a Wiki
The Volkswagen Type 3 (sold as the Volkswagen 1500 and later the Volkswagen 1600) was a range of small cars from German manufacturer Volkswagen (VW), introduced at the 1961 Frankfurt Motor Show, Internationale Automobil-Ausstellung (IAA).

The range launched in August 1961 with two models: the Notchback featuring ponton, three-box styling in a notchback saloon body, and the Karmann Ghia 1500 (also known as the Type 34 Karmann Ghia) with a coupé body. The first Variant (known as the Squareback in the USA) with an estate body followed in 1962. The Fastback, or TL version, a fastback coupé, arrived in August 1965, at the same time the 1600 engine was introduced. Two convertibles were announced with the original models, but did not enter production. Volkswagen of America began importing the Type 3 beginning for model year 1966 in the "Squareback" ('Variant' badges were not used in the US market) and "Fastback" but not the Notchback configurations.

At the end of 1967, the Type 3 'E' (Einspritzung) became the first German automobile in series production with electronic fuel injection (Bosch D-Jetronic) as standard equipment.

Volkswagen offered the Type 3 in a lower trim level in Europe, marketed as the 1600A trim level. In the US, and for 1973 only, Volkswagen offered two trim levels of the Type 3 Fastback in the USA, marketed as the Type 3 Sedan and Type 3 Basic Compact. The Basic Compact featured reduced content, including limited color and upholstery availability and without belt line chrome, clock, electric rear window defogger — and with painted frames around the vent windows, a black cardboard front trunk liner over the gas tank without a liner on the sides of the trunk or over the firewall, plain vinyl door panels without door pockets and rubber mats in lieu of interior carpet.

The Type 3 was initially equipped with a 1.5 L (1493 cc) engine based on the air-cooled 1200cc flat-4 found in the Type 1, but given a 69mm stroke it became the basis for the 1300cc and 1600cc engines that followed in the later Beetle (Type 1) and Volkswagen Type 2 T1 and T2. While the long block remained the same as the Type 1, the engine cooling was redesigned by putting the fan on the end of the crankshaft instead of on the generator. This reduced the height of the engine profile, allowed greater cargo volume, and earned the nicknames of "Pancake" or "Suitcase" engine. The engine's displacement would eventually increase to 1.6 L (1584 cc).

It used a similar transmission to the Beetle but with higher ratios. Unlike the Beetle (Type 1), the Type 3 engine and transmission unit was mounted into a subframe (which contained the complete rear suspension), in turn rubber-mounted to the floorpan and body, thereby isolating vibration and road noise from the passenger space.

The Type 3 engine received a larger displacement (1.6 L) for 1966 (August '65) and in 1968 became the world's first volume production car to feature electronic fuel injection — pioneered by Bosch. The Bosch D-Jetronic system was offered on the Volkswagen 1600TE & LE version (E designating "Einspritzung" or "injection" in German). A similar Bosch injection system was used in the later Type 4 VW 411, some models of the Porsche 914, and available for the Volvo P1800. Also introduced for 1968 was a fully automatic transmission.

A notable advance from the Type 1 to the Type 3 was the front suspension — although similar to the Type 1, it was the first Volkswagen front suspension to incorporate transverse round torsion bars, as opposed to the Type 1's torsion leaves. The Type 3's torsion bars are cross-mounted in the lower tube, so that each individual torsion bar spans the full width of the car, the upper tube containing an anti-roll bar that connects the upper trailing links to each other. In 1968 the rear suspension was upgraded to double jointed CV joint semi trailing arm suspension (sometimes called IRS by VW enthusiasts to differentiate it from the previous swing-axle type), a design feature that previously appeared on the VW Type 2 in 1967.

Like the Type 1, The Type 3 offered both front and rear luggage areas, with greater volume and easier rear cargo accessibility via a rear-opening boot (trunk) lid. In all four variants (Karmann Ghia, Notchback, Squareback and Fastback), the engine was located under a panel in the rear trunk. The Type 3 also featured wall-to-wall carpeting, and was available with air conditioning in the US.

The original Type 3 with 5-stud wheels used twin leading shoe drum brakes at the front. In August '65 (the '66 model year) these were replaced by disc brakes, coinciding with the introduction of the Fastback and 1600 engine. These have 4-stud wheels with 8 cooling slots. Rear brakes were always leading/trailing shoe drums. 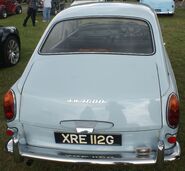 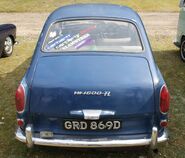 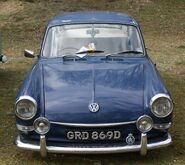 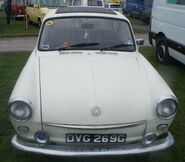 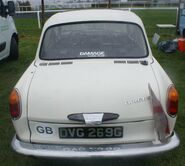 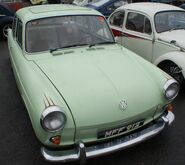 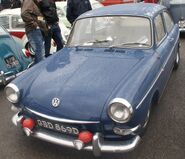 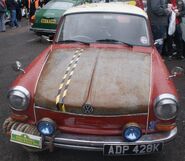 Volkswagen Type 3 Estate
Add a photo to this gallery
Retrieved from "https://classiccars.fandom.com/wiki/Volkswagen_Type_3?oldid=67433"
Community content is available under CC-BY-SA unless otherwise noted.